In paying video homage to a museum’s collected works of Japanese masters, Tabaimo reminds us of how nature and landscape greatly influenced Japanese decorative art, and also reminds us of the power of time-based media like video and animation. In this engaging and provocative series of works, presented at the Seattle Asian Art Museum, art and nature, the real and the imagined, the still and the moving, all come to play without boundaries. The force of Tabaimo’s work here is in the combination of a playful spirit and the rigor of a  skilled illustrator, animator and storyteller. 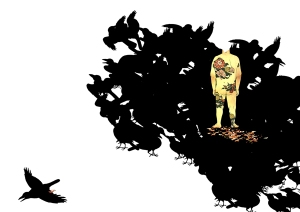 From 2015-16, at the San Francisco Asian Art Museum, the artist Ranu Mukherjee  created a a site-specific time-based installation, which like Tabaimo’s, paid homage to the museum’s collection while creating an altogether separate and powerful series which referenced the California Gold Rush, the Chinese Exclusion Act of 1882, and the ancient text The Classic of Mountain and Seas. Both of these installations were successful in that they broke up the solemnity of the museum-going experience, particularly in two cultural spaces where the careful spacing and lighting of precious and ancient objects d’art and works on paper can be too hushed and reverent of an experience. In walking through the Tabaimo show, each room was a surprise, alternating between museum objects and videos in a  way which permitted one’s mind to roam from past to present, from woodblock print to digital animation, from the inside to the outside. The constant movement from “cinema” to “gallery” was pleasant and engaging. The videos also serve to animate the objects which inspired Tabaimo, creating a rich visual dialogue between “old” and “new” and accentuating the dynamism of classic, treasured works. Further, the animations re-animate the gallery spaces, guiding our eye toward new directions and corners which may have been previously obscured by traditional hangings. In Crow (2016), animated black crows perch delicately just below the gallery’s ceiling. In the gorgeous and mysterious The Obscuring Moon (2016), an installed corner reveals a watery landscape so deep you can see birds and fireworks in the distance.

However one classifies Tabaimo, in my mind she is always and foremost a filmmaker whose command of cinematic language ties together her animation, illustration, and storytelling. She can tell whole stories with the simplest gestures: a petal falling off a flower from a man’s back, an aquatic tentacle reaching for a sake bottle, a flip of long hair, a turtle gently carrying a human baby on its back. She has a backstory for everything but still manages to leave us to narrate her stories – we fill in the silences and space and imagine those distant lands to which her birds fly.