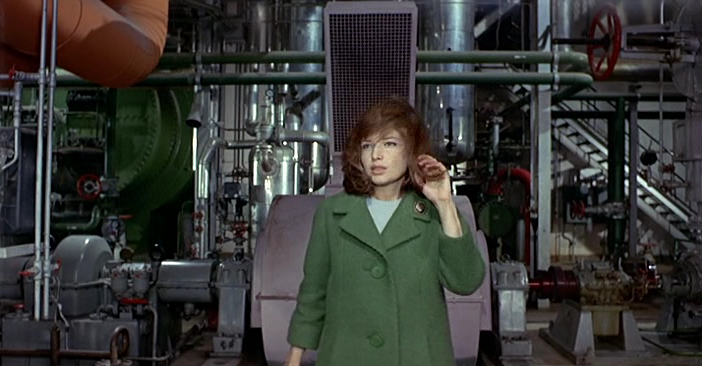 When Antonioni’s Il Deserto Rosso was released in 1964, Italy was in the middle of a major economic boom and a political re-organization. Despite being a relatively young nation-state, it became a founding member of NATO, a member of the United Nations, and a founding member of the EEC, which would later become the European Union. Economically, Italy (especially the north) experienced rapid growth, increasing its per capita GDP and enabling a much more consumerist economy and paving the way for the growth of prominent industries and businesses. While the film was based on Antonioni’s personal experience watching industrialization around his hometown of Ravenna, the film can also be seen as a reflection of the country’s more global pursuits.The film is peppered with talk of aphrodisiacs in Asia and Africa and business expansion in South America; both the capital and colonial imperatives are frequently alluded to. As with La Notte and L’Eclisse, modernity is painted in a particular way; this particular portrait is of (mass) production and labor and the correlative environmental destruction. It is such an outward-looking, modern Italy that will ship some workers to Patagonia and hire the rest to build radio telescopes that listen to the stars.

The impulse toward something more interior, individual, and personal is represented by Giuliana (played with green anguish by Monica VItti). For her, life is not about the outward-pushing show of face, might and money, but an inner, more humanist strength which she has lost since her car accident. She looks for literal sources of strength. In the opening scenes, she ravenously eats a sandwich taken from a factory worker; later she works on improving the interior of her future shop (ironically, to sell fragile ceramics), and through most of the film, tries to create a stable domestic life with her husband and son. She is at her inner best and strongest in the famous “shack scene,” during which she and her friends, huddled in a small shack on the precipitous divide between the world of the past and of the future, connect in a very real way, through jokes, sexual innuendos, a traditional meal, and huddling together by an old-fashioned stove. However, when the exterior world hovers close—international business concerns, an unnamed foreign ship,  an incurable disease—she falls apart.

Now 50 years old, Il Deserto Rosso continues to be praised for its painterly landscapes, its innovative use of color, and its strong compositional point of view. Along with L’Avventura, L’Eclisse, and La Notte, it forms a body of work that reflects Antonioni’s concern for the future of human integrity and beauty in the fast-expanding universe of modernity. I also offer that of Antonioni’s “alienation” series, this one makes most clear that the source of real fulfillment and happiness comes from the inside and from natural beauty. While exterior shows of power and modernity—whether a modern house, tall towers, or factories—have the power to distribute wealth and assert control, they do not have the same primal, magical, and binding force of love.