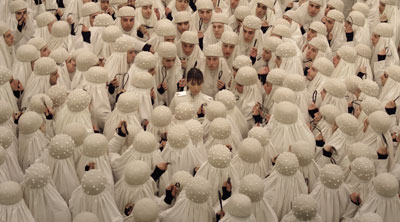 This year’s San Francisco IndieFest celebrates its thoroughly eccentric roots with the closing night film Jacky in the Kingdom of Women, an exuberant, crude, uncomfortably funny, very French and extremely political satire about the role and subjugation of men in a [dystopian] kingdom ruled entirely by women. The film has received some mixed to negative reviews in France, with particular mention of the many sight and verbal gags which undermine the “political statement” of the film. It makes one wonder about the discomfort the film engendered in Paris’ mostly white, male coterie of film reviewers. I think that Bay Area filmgoers, however, will appreciate (if uncomfortably) Mr. Sattouf’s tone and intent; I particularly liked that the film demonstrated the corrupting, capricious, and illogical forces behind absolute power, simply by switching men’s with women’s roles in a dictatorial regime. I don’t know that Mr. Sattouf is taking any particular gender sides, but the film clearly points out the dehumanizing nature of absolute power, of rigid social gender norms, and of enormous wealth gaps. This film is unlikely to see wide American distribution, so it is particularly timely and significant for the SF IndieFest to present this ultra-modern Cinderella tale full of sartorial (and culinary!) twists. With Charlotte Gainsbourg pleasantly outfitted in military chic.