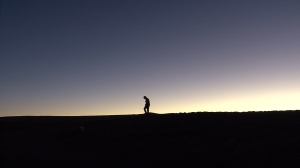 Absence takes on significant poignancy and force in these two films, from Argentina and Chile respectively, which deal with the South American desaparecidos from the 1970s.

The Official Story, which won the Oscar for Best Foreign Language Film in 1985, concerns the absence of the biological parents of Gaby, who was in turn adopted by the bourgeois couple Roberto and Alicia (the divine Norma Aleandro). We find out that Gaby’s parents were kidnapped and murdered during Argentina’s “Dirty War;” worse, her adoption may have been immorally organized by Roberto. As this horrific mystery unravels, we see more absences through Alicia’s eyes, including the absence of awareness that her closest family and friends all suffered from the political junta.

Nostalgia for the Light, the recipient of numerous documentary awards at international film festivals, makes a strong case for the philosophical parallels between the privileged scientists who use the observatories at the famous Chilean Atacama Desert, and the marginalized women who search the vastness of that same desert for any remains of the desaparecidos of the Pinochet régime. The futility of knowing is clear: even after centuries of research, the scientists have still yet to fully comprehend the number and variety of all the celestial bodies that surround us. And even after decades of searching in the desert and petitioning the government, many Chileans still cannot have answers about their loved ones’ disappearances.

There can be no such thing as a true absence, as the disappearance of a person or the mystery of an object only strengthens the forces at work – whether it be the force of political belief, of memory, of discovery, of persistence. The mothers and the grandmothers of the desaparecidos work tirelessly so that the absence is constantly made present; likewise the astronomers look to the absences in space to answer our questions about life. The human desire for a narrative and for closure persists in the face of all mysteries and forces.