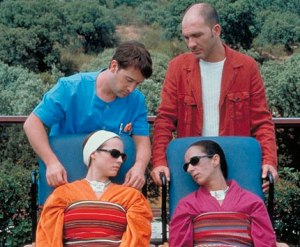 I enjoy the way in which Almodóvar can render the unusual as perfectly normal. Sympathetic girl-next-door nuns; long-lost transsexual fathers; mothers raised from the dead; novelists who waver between hysteria and flinty pragmatism – Almodóvar reminds us that we are but one fake-eyelash away from ridiculousness. In a cheerful way, he reminds us that we should never judge others, never let our prejudices get in the way of empathy.

After all, we are all equals in life, especially in love. Sadness and drama befall us all. The truths about love are enunciated by a cast of slightly-out-of-normal characters to remind us of its universality and its exquisite sense of humor. In love, comedy and tragedy are so closely entwined you don’t know where one ends and other begins. In Talk to Her, there is nothing funny: two comatose women, one of whom has been gored by a bull, one who will later be raped by her caregiver, lie (beautifully) comatose in a hospital. They are attended to by their men, who talk to them through their comatose state. The men are heartbroken and eventually learn to love each other, brought together by grief and a shared denial of their situation. This denial is what is so funny about the movie (and the genius of Almodóvar). In talking to their women, they reveal the truth about themselves, in a way that they couldn’t – and didn’t – while the women were conscious. That is the humor of it all. The physical strength of the women (a bullfighter and a dancer) equaled an emotional strength which the men find overwhelming and cannot address until the women are physically and emotionally mute. Perhaps it’s not funny in a strict sense, but I found myself laughing out loud at the many emotional truths which are uncovered.