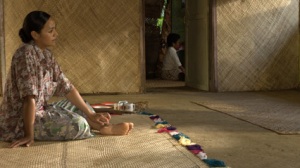 Aurora Guerrero’s Mosquita y Mari and Tusi Tamasese’s The Orator are both community-specific in mise-en-scene and in the languages of love they portray. The first, in the largely Hispanic Los Angeles city of Huntington Park, and the latter, on the lush island of Samoa, offer the audiences an intimate view of quotidian life in these communities. Watching these two films practically back-to-back, moreover, presented two ends of the love spectrum.

One one end of the spectrum, in the blush of first love, are the protagonist girls of Ms. Guerrero’s engaging feature film debut. Ah, youth! we couldn’t help but think as the girls fall in love with each other through the innocent gestures – doing geometry homework together, sharing ice-cream on the sidewalk, lying side-by-side, talking about their dreams. Cinematographer Magela Crosignani captures the in-the-clouds dreaminess of young love, with beautiful shots of the California sky, the trees, particles catching the light like little thoughts, the girls’ hair flying in the wind and brushing against each other. On the “older” end of the spectrum is the marriage between Vaaiga and Saili in The Orator. She, a woman banished from her village, and he, a little person isolated from a hyper-masculine Samoan world of rugby and chiefly rites, have that kind of profound love which comes from time, understanding, and compassion. The screenplay captures the nature of that love, with the couple expressing their feeling for each other through public and domestic acts of kindness and generosity. They say little to each other because they know each other’s thoughts intimately. It is quite a lovely surprise to the audience to see the narrative moving forward without us – they know the future before we do, communicating to each other silently.

The small and great things which people will do for each other in the name of love – the list is endless, which makes great material for filmmakers. Love is universal, but each circumstance is unique, which is why we return to these stories again and again. What is particularly admirable in both these films is that they unravel instances of love in difficult circumstances, and place us squarely in the sweep of love, regardless of the communities we have come from.