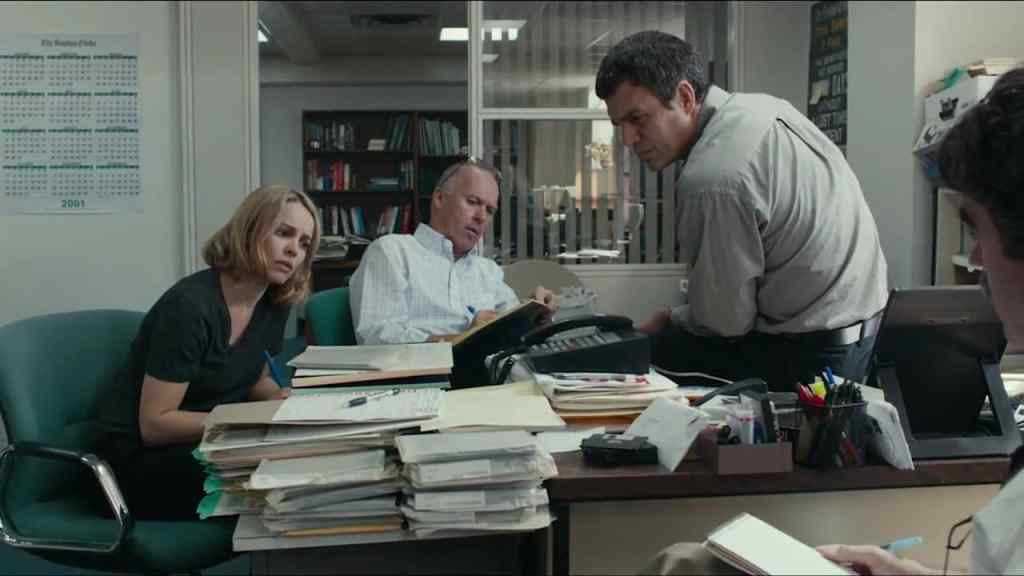 We think Martin Scorsese would be pleased with Tom McCarthy’s elegant depiction of the (mostly) male clubs of a certain (and large) Boston milieu closing ranks against nosy, lapsed ex-Catholics who want to expose their secrets. Like Paulie Cicero’s Goodfellas and the standard purveyors of The Age of Innocence‘s first families, outsiders are dealt with harshly and systematically. However, with subtle and friendly “talks” in bars, charitable galas, and other public areas, the men protecting the Catholic priesthood of Boston don’t need guns or goombahs to shut down journalists. For one thing, there is the sheer number of them: attorneys from white shoe firms, alumni and donors of prestigious Catholic schools, and of course the Catholic hierarchy itself, including the Cardinal, who seem to be both cloistered within their country clubs and benevolent associations while simultaneously being everywhere, the eyes and ears of their community. Together they constitute not just volume, but mass; expressed throughout the film is the sense that their power and influence, real or imagined, is real enough to most people, particularly the poor of their community, that even those families of the abused also close ranks to protect their priests. They seem to feel as though they owe everything to the Church that betrayed their trust.

A less subtle filmmaker might have taken a different road and made a film about Big Church the way one might make a mainstream film about Big Pharma or Big Corporation, complete with mysterious accidents and people in witness protection programs. But the film’s dignified pace is utterly correct for its loyalty to the pace of investigative journalism, whereby the search for the truth needs to be thorough, straightforward, and unambiguous, even if the truth presents a certain level of ambiguity. One could not help but think of All The President’s Men, where due diligence is the star of the show. Going literally door to door checking names and faces, reading through the minutiae of phone books and records, and continually maintaining a balance between individual stories and the Big Story is what propels our stories and furthers the practice of journalism. We are reminded, poignantly, in this era of sound bytes and 24-7 headlines, that journalism remains a serious and necessary political and civic endeavor.