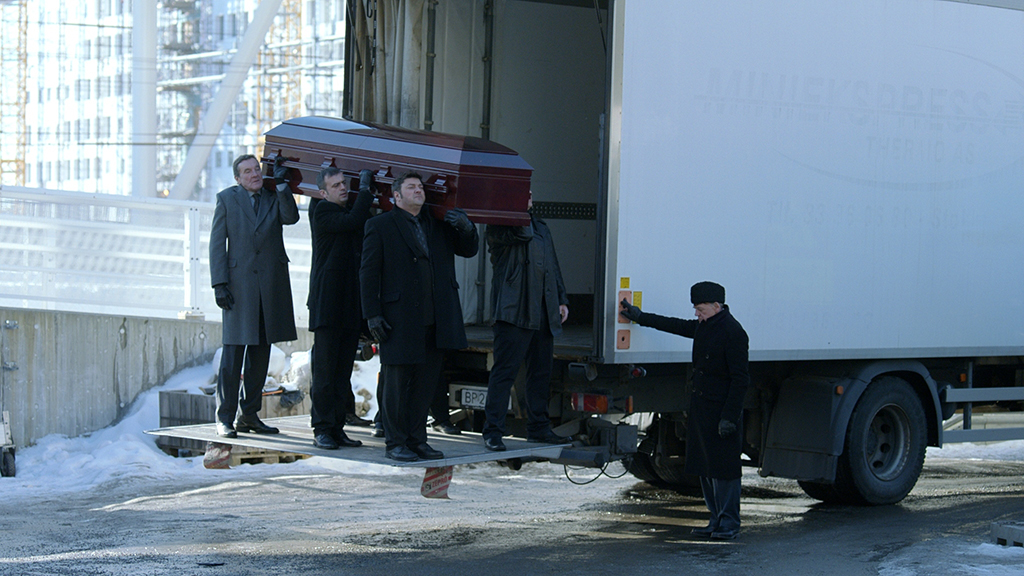 Revenge is definitely a dish best served cold, especially when that cold refers to the gorgeous Norwegian winter which serves as a key character and the silent Greek chorus in Hans Petter Moland’s In Order of Disappearance (Kraftidioten). The direct, cold violence and black-and-white thirst for revenge is made even starker by winter in all its glory: several-foot-high snowdrifts, blue waterfalls, snowstorms, and an enormous snowplow which serves as a metaphor for action and for some ritual cleaning. Even cocaine, the drug which spurs all of our male characters into action, has a light, pure, snowy quality as it spills into violence.

Winter, of course, has served as a metaphor for death (of which there is plenty in this film), but, in this very stylish Norwegian western, the purity of that snow represents a certain moral code to which the villains and protagonists strive to adhere. The Count, the key villain and drug dealer extraordinaire, fanatically adheres to a healthy lifestyle, cleanliness, and high sartorial standards (he also lives in a classic villain’s modernist house). His rival drug dealer (a command-worthy Bruno Ganz) is a gangster who adheres to old-school loyalty and dynastic principles. This further underscores the cycle and futility of violence. The filmmakers strive to help us understand what drives them—assassins, ex-cons, ex-wives, errand boys, boyfriends—to arbitrarily suspend certain morals in favor of other ones; the witty, tight writing on civilization, family, Stockholm syndrome, and getting 5 servings of fruits every day, makes each character memorable, their motivations almost understandable.

One of the many lovely, stylish touches in this film is the death tally, in the form of white-on-black titles that include the recently deceased’s name, their gangster nickname (as applicable), and their religious affiliation, whether Lutheran, Orthodox Christian, Jewish, or atheist. While their actions are immoral, their faith in something higher than themselves is pure. In death, they lose all markers of identity, other than their gravestone.