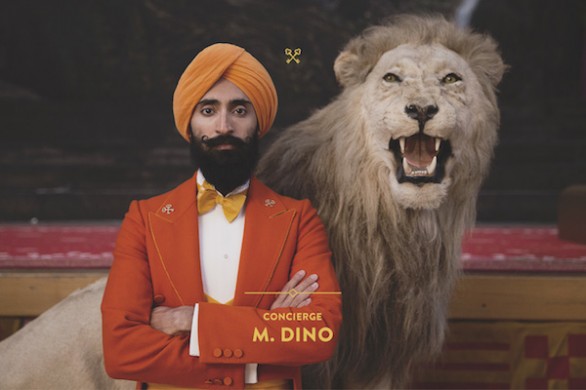 At the heart of Wes Anderson’s effortlessly stylish, luxe and purple-clad film is a touching story about family. The film is full of charm, effervescence, and visual panache, but it is anchored by a sustained (and occasionally sentimental) melancholy that provides substance and reminds us of his other films. Like the children and their friends of The Royal Tenenbaums, Rushmore‘s Max Fischer, and the brothers of The Darjeeling Limited, the characters of The Grand Budapest Hotel are in a continuous search to find love, family, and community, sometimes outside their already existing (and dysfunctional) families. Zero, who is a war orphan many times over, finds a father figure in Monsieur Gustave; likewise, Madame D, her mansion filled to the brim with greedy heirs attired in what looks like pre-war Helmut Lang, finds solace in his arms. M. Gustave, courtly and fatherly toward Zero’s fiancée Agatha, is a stark contract to Agatha’s fearsome boss, Herr Mendl, thus earning her loyalty in the form of perfect pastries only Anderson can contrive.

Though it seems that M. Gustave has given up  a “normal” family life for a lifetime of distinguished, flawless, fabulous service in a grand hotel, it turns out that he is actually a key member of several tight-knit families whose love and compassion sustain him through his life and through the impending war. His hotel family eat together and protect each other from the encroachment of a menacing military presence. In prison, he makes a new and temporary family with some exacting and intelligent criminals with whom he instills the concept of family mealtimes. His penultimate family, however, is in the form of The Society of the Crossed Keys, a secret society-cum-family of concierges from the best grand hotels in the world. In one of the film’s best sequences, Anderson deftly establishes the strength, loyalty and ferociousness of a family who call upon all their mighty concierge powers to aid a zany prison escape, and reminds us that the antidote to barbarism and uncouth manners is a family who is but one phone call away.