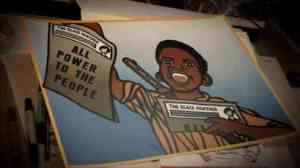 Power to the People, by Emory Douglas

Mumia: Long-Distance Revolutionary is exemplary of the many contemporary models of independent filmmaking and distribution. It takes advantage of our digital century and its mobile technologies while using personal, grassroots, community organizer – style outreach to reach diverse audiences. In many ways, this is an old-school documentary, a selection of chapters in the long biography of a journalist whose 30-year imprisonment overshadows his professional accomplishments. But its creation, distribution, reach and longevity is  new-school: the filmmakers have creatively and successfully given it the space it needs to bloom. Last year,  Mumia showed at several prominent film festivals; I reviewed it in this blog in 2012 as part of the Mill Valley Film Festival. This year, having been picked up by First Run Features, it is now on an impressive multi-city tour before going on the international fall festival circuit. It is available on DVD, Netflix, and iTunes. It is still going strong, to say the least, and this conversation – about his life and legacy- continues.

I spoke to the director Stephen Vittoria by phone this week, and, as when I heard him at Mill Valley Film Festival, his energy and passion remains strong. Mr. Vittoria is committed to ensuring that Mr. Abu-Jamal’s intellectual, philosophical, and journalistic accomplishments are duly recognized, and more important, reach as many diverse audiences as possible. In speaking to him, I was struck by one particular (if obvious) observation: despite the incarceration and attempted silencing of Mr. Abu-Jamal, his story has not been suppressed. Neither can his supporters be silenced. This strikes me as an important facet of democracy. While the film exposes a great flaw in the American justice and prison system, that this film is made and widely distributed (despite its controversial main character), reminds us why the right to free speech is key to and wonderful about American life. In thinking about the many international filmmakers (including those I’ve written about here) who have been imprisoned and silenced, I am both impressed and relieved that our artists, Mr. Jamal and Mr. Vittoria included, can still tell their stories. It’s a good reminder of what a democratic medium film can still be, and how transcendent.

Mumia: The Long Distance Revolutionary is playing at San Francisco’s Roxie Theater from August 23rd-29th. There will be a question and answer after the screenings.