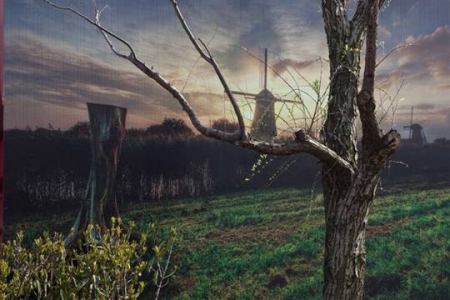 Wang Guangyi, Porsche (2005). Oil on canvas.
First-time filmmaker Mika Mattila did not intend to make a documentary “about China.” As a foreigner, and in particular as a Westerner, he did not feel comfortable making a film “about China,” even as he resided and worked there for many years. Rather, he was interested in the current state of contemporary art.

However, in focusing on the particular (contemporary art, and two artists in particular) Mr. Mattila illustrates the global/national nature of China’s ambivalence. In Chimeras, we feel the opposing forces of east/west, community/individual, communism/capitalism. Mattila, a gifted cinematographer, observes older people practicing tai chi in front of a Cartier store, the prevalence of faux-European living communities, westerners curating shows on local Chinese architects, and the hood ornament of a Jaguar contrasted with a Chinese dragon. It is difficult to tell a story about contemporary, urban life in China without reference to the external economic, global, and cultural forces that shape it.

What better medium than art to demonstrate these often-opposing forces? The featured artists in this film, eminence grise Wang Guangyi and emerging photographer Liu Gang deal with these forces in different ways which reflect their generational divide. Mr. Wang was born during the Cultural Revolution and was privy to the enormous cultural and economic shifts undergone by his generation. He was a founding member of an emerging Chinese avant-garde, an advocate for local artists, and a creator of works which question Western influences on Chinese culture. His crisis is one of patrimony and influence (what he calls “brainwashing”): his education has been in the western canon, but his artistic (and political) spirit is Chinese. On the other side is photographer Mr. Liu, born into the internet generation, fluent in the language of globalization and familiar with the allure of capitalism and western branding. His crisis is whether to continue to work on being an artist (which he associates with a western notion of individual utility) or whether to marry and raise a family (associated with local notions of community). Like Mr. Wang, he is aware that contemporary bourgeois ideals are tied up in western standards, and uses his art to explore the superficiality of those ideals.

I sympathize with Mr. Mattila’s insistence that this is a film about contemporary art, not about China. This strong and beautifully-filmed début treads into controversial, if fascinating, political waters. Nonetheless, the practice of art is political, whether it takes place in a public arena or a domestic setting. This is unavoidable: artists constantly question the world and its workings. Mr. Mattila himself acknowledges that in the making of his film he, too, started questioning his own Finnish identity. This is what makes for great and courageous art, one that both enriches us and encourages us to question.

Wang Guangyi has exhibited at the Saatchi Gallery and the Shanghai Art Gallery, among many others worldwide.
Liu Gang has been featured at China Art Projects and at C-Space Beijing.