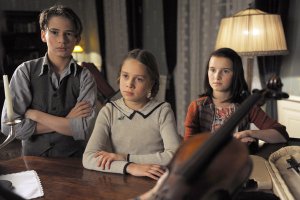 I was struck by the number and variety of films at this festival which dealt with the question of identity and culture. Whether its Barbara and her East-West tension, or the Afro-German women called into action by Audre Lorde, Sabine in Color of the Ocean, or the children in Wunderkinder and Combat Girls – identity is at the heart of the conflict.

What is identity, after all? These films challenge the notion of a certain purity of identity. It is relative to your geography, to the identities of those surrounding you, and to the identities of those who hold the most social and political currency at that moment of the narrative. The women in the Audre Lorde film become more “German” the more they become “Afro.” The siblings in Wunderkinder identify as musicians internally, but are classed as nationalities externally.

It is easy to take it for granted – many of us go through life with a fairly steady relationship to our identity, with varying degrees of intensity. We code-switch as needed, part of our marvelous facility to adapt. But as these films show, the fluidity of identity can come at great emotional or physical cost. Furthermore, war – World War II, the Cold War, civil war, class war – forces people into identity categories which jeopardize their survival. Diaspora is inevitable – they all go to places where they hope to belong.