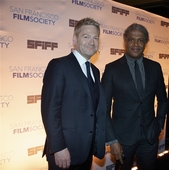 The first time I saw Kenneth Branagh in person was at the now long-gone Tower Records at Lincoln Square in New York. I followed him up the escalator to the jazz section and got his autograph (giddily) over Dave Brubeck. Then I saw his Richard III at the Crucible Theatre. Shakespeare and Branagh, since my teens, have been a strong component of my artistic education – so you can only imagine my delight in seeing him at this festival.

On stage and screen, Branagh knows how to work Shakespearean narrative with an ease and enthusiasm which I’ve always admired – even if I don’t agree with the result. He knows how to visually and aurally manipulate Shakespeare’s work, to great impact. We can hear a play and we can see a play. Whether it’s the visual impact of several white-shirted soldiers on horseback galloping toward the camera (Much Ado About Nothing) or the sound of Derek Jacobi’s unmistakable voice opening Henry V – he knows how to effectively and unashamedly pack a punch.

I was more than delighted when he received the Founder’s Directing Award. It was well-deserved for his body of work. For me, however, it was also an award which acknowledged his fidelity, not to the Shakespearean narrative, but to the Shakespearean intent: playfulness, boldness, urgency and romance.

And yes, that is Elvis Mitchell with him in the photograph above. It doesn’t get better.