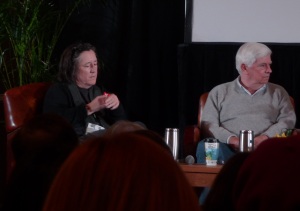 This morning’s Cinema Cafe film panel (circuitously) tackled the issue of intellectual property and piracy in the aftermath of the SOPA-PIPA debate and within the context of protecting the interests of the independent film community. David Carr of the New York Times moderated the panel, and he clearly relished the role of cranky provocateur/insider, trading jibes and insider jokes with his colleagues. The former CT senator Chris Dodd, the current chairman/CEO of the MPAA, and John Fithian, president and owner of the National Association of Theater Owners (and whose father served in Congress with Senator Dodd), made up the old boys’ club of the panel, representing mostly big studios, and, increasingly, independent filmmakers. Rounding out the panel was eminence grise and independent film producer Christine Vachon, who actually makes films, and is an ardent supporter of new modes and technologies in film production and consumption. As with last year’s San Francisco International Film Festival, her voice and presence were much appreciated by the audience.

It was clear from the panel discussion that while there is, in principle, general support for different modes of film distribution, there is a large and global problem with protecting IP. And while on some scale there are smaller instances of piracy (individuals illegally downloading content, etc.) there is an understanding that illegal content distributors are the group to tackle. In addition, there was a general agreement that organized, large-scale, global piracy issues must be addressed in concert with federal government agencies, film distributors, studios, consumers, and filmmakers. Dodd and Fithian, of course, argued that SOPA/PIPA was a rigorous, well-defined piece of legislation which would not have impeded freedom of speech nor “taken down” the internet in such a catastrophic scale as argued by Google + Co. Carr gleefully pointed out how the federal government was humiliated by a populist defeat. Vachon stuck to her guns and pointed out the ways in which the filmmaking community needs to be more innovative in terms of protecting and distributing content.

Apart from Ms. Vachon, this panel summed up my current feeling about the players in the SOPA-PIPA debate. One side is the Old Guard, consisting of the big studios and the distributors and their lobbyist friends. Google, Wikipedia, and other purveyors and aggregators of information and personalized advertising, represent the New Guard, with entirely different but not exactly competing interests. Both groups comprise mostly white men of a certain age whose chief goals include profitability and ensuring a strong influence in the federal government, even as they ask it to lay off its methods. It’s the same old boys’ club in different format, and what’s really lost is the voice and the intellectual property of the independent filmmakers, who ironically, lose more and more ownership the more distributed their films get.