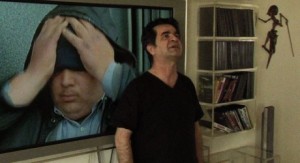 As of this moment, there are seven (known) Iranian filmmakers imprisoned or otherwise under house arrest for their political views: Jafar Panahi (whose case is currently under appeal), Mojtaba Mir Tahmaseb, Katayoun Shahabi, Hadi Afarideh, Naser Safarian and Mohsen Shahrnazdar. It is an awful state of things generally and, ironically, a reminder to me that many of the best filmmakers come from Iran, a country with a long history of fantastic literary and visual production.

Government censorship remains a reality today, even with the latest technologies and innovations in art-making, production, and dissemination. Art in some places is not a commodity or luxury but a political object which censors and governments think they can permit or stop at will. Art is still considered dangerous (Ai Wei Wei, I’m thinking of you!). By stopping the artist, they think they can stop the production of art and curb dissent and criticism.

But art is elusive and can slip through the instruments of power. Jafar Panahi’s This is Not a Film, which received rapturous reviews at the Cannes and New York Film Festivals, is a testament to this. Yes, the actual physical film made it past the Iranian borders, but more than that, our international support for Mr. Panahi and his fellow filmmakers knows no bounds. As consumers (and critics) of art, we support these artists by watching their work wherever and whenever we can. It won’t topple governments, but it will extend the time and influence of their work.