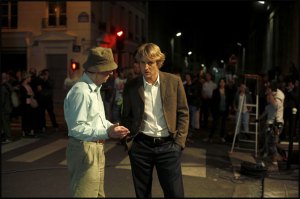 I plead guilty to the fault Mr. Allen gently chides in this film: excessive nostalgia. I, too, have an immoderate love of the 1920s and often felt I should have been in my twenties then. Nostalgia of a different sort also pervaded: this film is a descendant of some early Woody Allen films. There are echoes of Purple Rose of Cairo, Shadows and Fog, Sweet and Lowdown, even Interiors (there’s an overbearing interior decorator mother-in-law). I liked the movie for its Cole Porter-wit, unapologetic romance, and highly enjoyable performances from Marion Cotillard, Corey Stoll, Michael Sheen, Kurt Fuller and the irrepressible Adrien Brody. Paris of course is the real star of the film; cinematographer Darius Khondji lovingly captures the details which make the city – iron railings, the moon over the Seine, the quiet streets, the rush of trees. Nostalgia or not, we cannot help but be wooed by its charm.

Winner of an Academy Award for Best Original Screenplay.