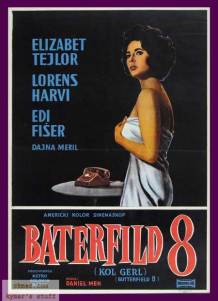 I was never a fan of the late and great Elizabeth Taylor’s films, not even those marvelous Tennessee Williams adaptations. But as recently as six months ago I saw Butterfield 8 for the first time and was profoundly moved. Many actresses have played that version of the call girl with the heart of gold – Audrey Hepburn, Jodie Foster, Kim Basinger – and inevitably receive an Oscar for it. But her Gloria Wandrous – for which she did receive an Oscar – was a complex and unsettling portrayal of female sexuality.  Hers was a disturbing mix of glamour, privilege, neglect, savoir faire and romantic longing – I both cheered her on and reviled the male gaze which rested greedily on her emotional squalor.

She stipulated that she arrive at her own funeral fifteen minutes late. And so she did,  her casket draped with gardenias, violets, and lily of the valley. Gardenias traditionally stand for love and being lovely, violets for affection, and lily of the valley for majesty. An appropriate and touching bouquet for this marvelous flower of a woman.